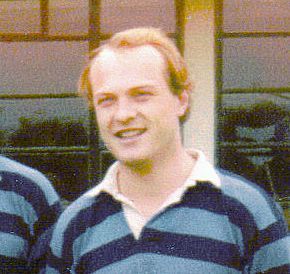 We are very sad to report that Pat Holder died in December 2006. Pat had suffered from cancer for the past 10 years and was somewhat of a medical phenomenon having not been expected to survive on several occasions. Throughout the duration of his illness he had many operations on most parts of his anatomy and survived them all with amazing fortitude.

Pat was at Southampton University with Steve Williams , Gareth Hopkins, Bernie , Dai and Ian Jones and joined Centaurs in the mid-1970s playing wing-forward for a number of years. He was a member of the sevens team that won the Ealing 7's in 1979.

He made his way to Germany where he started a successful bicycle-hire business based at Munich Central Station.

He will be missed by his Centaurs friends as well as his wife Gabby and his three sons Daniel, Felix and Michael.